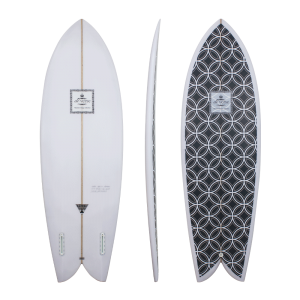 The Astral Tracer twin fin ranks high for maneuverability.  A twin fin can practically turn on a dime.  When making a turn, one fin will act at the pivot point while the other spins around it.  The result is a board that will go exactly where you point it.  It is also known for being very fast.  It doesn’t have a trailing center fin producing drag which means the board can speed down the line. The Astral Tracer has a concave deck in the tail making a lower centre of pivot and increased control.

The Astral Tracer works best in conditions from 1-6ft.  The looseness of the setup makes it one of the best for sloppy conditions between 2-4ft but a skilled surfer can utilize a twin fin in steep 5-6ft+ conditions.